This blog is currently idle. Our new website is http://heathensagainst.org. Please join us there!
Posted by Heathens Against Hate at 6:55 PM No comments:

HAH and The Troth

Heathens Against Hate is now part of The Troth's organizational umbrella. HAH retains its individual Mission and membership policies, and The Troth supports HAH's efforts as part of its Public Relations team efforts.

Thank you for your support!
Posted by Heathens Against Hate at 12:06 PM 1 comment:


Ásatrú is not a racist religion. Anyone who wants to be in Ásatrú should be in Ásatrú. And the word "anyone" means just that: anyone -- regardless of race, color, ethnicity, national origin, language, sexual orientation, or other divisive criteria. Today, we live in a multi-ethnic nation (not to mention a multi-ethnic world). As Ásatrú advances, it will inevitably become more and more a multi-ethnic religion.

But, unfortunately, some people seem to think that Ásatrú is a racist religion.  Why?  Probably because there have been some people in Ásatrú who were racists and some of these have tried to use Ásatrú as a front for their racist views, claiming that it was somehow an exclusively "Nordic" religion, only open to those of "pure Aryan" descent. However, the existence  of  a  few  racists  does  not  make  Ásatrú a racist religion. Almost every religion has had some racists in it at one time or another. In Sri Lanka, for example, there are some Buddhists who are so racist that they have recently been killing the ethnic-minority Tamils in their country, but that does not make Buddhism a racist religion.

Another reason some might think that Ásatrú is a racist religion is confusion and misunderstanding about the "Scandinavian Connection" of Ásatrú. The truth about this is simply that the Æsir and the Vanir were followed longer in northern Europe than elsewhere, and thus we know about them from there. That is the reason why  we  use  the  Old  Norse  names for the Deities and other terms, and are so interested in pre-Christian Scandinavia. It is fine for those of northern European descent to seek out their cultural roots, but no single ethnic group "owns" the Gods of Ásgarð.

Some people have suggested that the ancient inhabitants of northern Europe believed in racial exclusivity, in other words that they were racists. I do not believe this. However -- even if it was true -- it does not matter. Just because a person's remote ancestors might have been racists is no reason for that person to be a racist today. If one's great-grandfather was an arsonist, one need not and should not follow in his footsteps.  (Those interested in the racial attitudes of the Viking-age Scandinavians should read the article "RACE, INHERITANCE, AND ÁSATRÚ TODAY"  by Kveldúlfr Gundarsson that appeared in MOUNTAIN THUNDER number 5, Summer 1992. This article shows that European descent is not necessary for full participation in modern Ásatrú.)

The characteristics we admire so greatly in the Vikings came about because the Vikings followed the Æsir and the Vanir  --  not because they had blue eyes or blond hair. These same characteristics are available today to anyone who wants to develop them by following the way of Ásatrú. It is important to remember that admiration for these attributes is not Eurocentric, it is universal. Every culture that has ever existed in the world has inherently esteemed the virtues esteemed by Ásatrú, including: courage, honor, hospitality, independence (and liberty), individuality (with self-reliance, and self-responsibility), industriousness (and perseverance), justice (including an innate sense of fairness and respect for others), loyalty  (to family,  friends,  and the society of which one is a part), truthfulness, and a willingness to stand up for what is right.

What makes the Ásatrú way of life different from that of other religions,  is  that  the  Ásatrú  "Code of Conduct" supports and encourages these virtues far more strongly than do other religions -- some of which actually discourage several of these ideals.  People who have the characteristics we admire acquired them because  their  culture  contains  values similar to those of Ásatrú (in some cases because their culture was rooted in Ásatrú). Conversely, people who have characteristics we dislike come from backgrounds that lack those values because they are no longer taught. This is a social problem, not a racial one. It has to do with the breakdown of the family and the resultant crumbling of all cultural values. It has nothing to do with eye-shape, or hair-texture, or skin-color.

Ásatrú  is  a  multi-ethnic  religion  --  not because that might be "politically correct" at this point in time, but because multi-ethnicity is fundamental to the theology of Ásatrú. Ásgarð, home of the Gods, is multi-ethnic. For example, Magni and Móði, the sons of Þórr, are also the sons of their mother, Járnsaxa, who is a Jötunn.  Who will tell Þórr that his sons should  not  participate  in  something  because  they are not of "pure" descent? And what of the Vanir? Since the Gods of Ásgarð do not worry over these things, the Ásatrú people of Midgarð certainly have no need to do so.

In the Prose Edda there is a passage about the many names of Óðinn that says:

Then said High One: "It would take a vast amount of knowledge to cover them all, but it is swiftest to say, that most of these names have been given (to him) because, the many different nations speaking different tongues in the world, all wanted to change his name into their own tongue in order to address and pray (to him) for themselves."

As for the so-called "ethnic descriptions" of the Deities sometimes encountered in the literature, these resulted from people trying to visualize the unvisualizable. Those who, for example, wrote about the red beard of Þórr did so because they knew men who had red beards. Does a God have a beard of any color?  (Theologically  speaking,  the  answer  is  "yes" but only if and when the God wants a beard, and it would then be any color the God desired. A God does not have human ethnicity of any kind, and is far more different   from   any   particular   human   than  is that human from any other human on earth.) A comparison can  be  made  with  the  "Asian  faces"  on  Japanese statues of Buddha, who was an Indian, or the blue-eyed paintings of Christ that were so popular in the European middle ages.

All humans, we believe, descend ultimately from Ask and Embla who were created by the Gods. What color were Ask's eyes? What color was Embla's hair? Such questions are ridiculous. Since all humans are related to each other by blood, all humans have the same inherent source-potentials -- and the same instinctive longing for the Gods of Ásgarð who watch over all the peoples of Midgarð, not just some small group of them. Any thinking person, whether or not an Ásatrú believer, can logically see that there is no place for racism of any kind in Ásatrú. Nor has there ever been.

Racism comes from two sources:  (1) A psychological fear of anyone who is "different" in any way, and (2) A psychological need to find someone to blame  (a  "scapegoat")  for  whatever  misfortunes happen to occur. Neither of these attitudes is logical.

In the Old Stone Age, little groups of 20 to 30 inbred humans lived their lives separated by vast distances from all others of their species. On the rare occasions when humans from another group happened to be seen,  they looked different  --  and the reaction was to kill them, or at least to drive them away. Times have  changed.  We  no  longer  shave  with  stone axes. But for some people the Paleolithic mentality lingers on.

In the Modern Age, racists will become more and more isolated from mainstream society (and reality) -- living lonely, bitter, and paranoid lives.

Those of us who have spent our lives fighting both  alongside  and  against  many  of  this  world's diverse ethnic groups learn to appreciate the essential similarities of all humans and to ignore the superficial differences.  Every life is filled with combat situations --  physical,  mental,  and  spiritual.  When  facing combat,  it  is  always  better  to  pick  allies  who share with you the Viking values of Ásatrú than those who share with you only your skin-color.

Alexander "Gamlinginn" Jerome was a Troth Elder and Heathen leader who joined the ancestors in 2017. His family has left the rights to his writings to The Troth, and this repost is done with The Troth's permission.

Posted by Heathens Against Hate at 10:35 AM No comments:

From Life After Hate 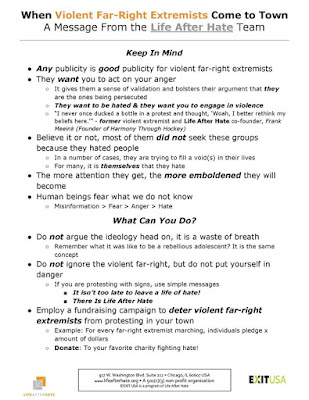 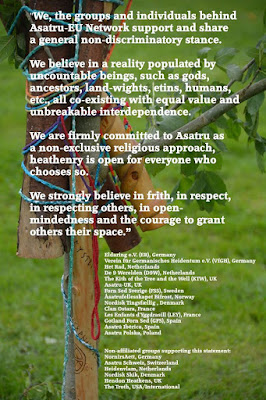 Posted by Heathens Against Hate at 2:16 PM 2 comments: 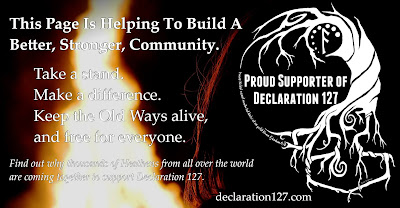 Posted by Heathens Against Hate at 9:33 AM No comments:

This is an all too familiar song and dance, so it is important for the Heathen community to be proactive in our response to it. These men are criminals with a violent history. According to the affidavit in support of the criminal complaint against Chaney, he and Doyle each are convicted felons. Some of the circumstances of this case are reminiscent of virulent forms of prison Odinism that bring stigma to the rest of Heathenry. What we see in these cases is Heathenry being co-opted to advance a political and social agenda that, at the core, has nothing to do with the religion. This perversion of our faith operates against the advancement of Heathenry. This is not a way to honor or to bring bright fame to our gods and goddesses.

The people in the churches and synagogues are not our enemies. The enemies are those who bring shame to our communities through reprehensible actions. Heathens Against Hate is thankful that the FBI thwarted the efforts of these men and that no one was injured. Issues such as this underscore the importance of In-Reach Heathen Prison Services.
Posted by Heathens Against Hate at 7:15 PM 4 comments: